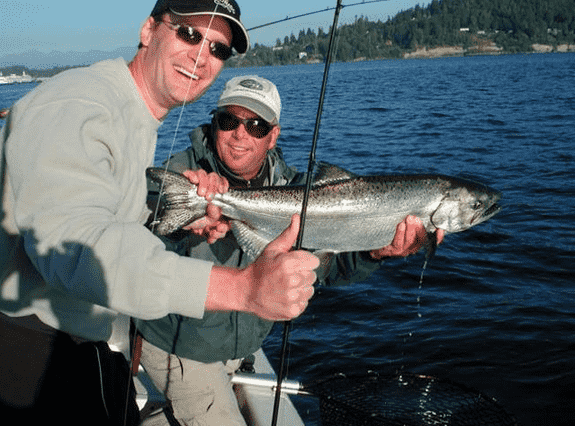 While some people are fish experts, others aren’t as well versed in fishing and the differences between each subspecies. Many people know there are salmon in the Puget Sound, but less people known how to tell whether the salmon you caught is a Chum, Chinook, or Sockeye. Whether you’re an expert fisherman or casting a rod for the first time, here are the five different types of salmon you may find while fishing on the Puget Sound.

CHINOOK
Chinook salmon, also known as King salmon are typically a dark silver color with blue or green accents. Their typical weight range is between five and 30 pounds, but they’ve been recorded to way up to 120 pounds. These fish are known for their large size and are the largest salmon species. They are considered to be mature when they are three,four or five years old . Adult Chinooks migrate from the ocean up into streams to spawn, do this ritual once in their lives, and then die. They are most commonly found in Washington, Oregon, Alaska, Idaho, Northern California, and Western Canada.

CHUM
Chum salmon, sometimes known as Dog salmon are among the most abundant species in Washington. Chum are characterized by their black and silver coloring and smaller size, typically between eight and 15 pounds. Though sometimes this species of salmon gets a bad reputation for its thicker texture, there are many great recipes for chum salmon and it’s always a good choice for smoked salmon.

COHO
Coho or Silver salmon have similar coloring to Chinook salmon , but are smaller in size with an average mature weight around six to fifteen pounds . You can also tell the difference between the two by their jaw characteristics, as Coho salmon have lighter coloring around their jawline. These salmon are also common in the Puget Sound.

PINK
Pink or Humpy salmon are smaller than their cousins, typically weighing under five pounds and measuring under two feet in length.They are only in Puget Sound every other year during odd numbered years. These fish are silver without dark markings other salmon species are known for, although their coloring typically becomes darker during spawning season. They are also known as Humpy salmon, because male salmon develop a hump on their backs when they reach the area where they will spawn. A typical female Pink salmon will lay between 1,200 and 1,900 eggs in her lifetime.

SOCKEYE
Sockeye salmon, also called Red salmon and Blueback salmon typically have dark blue backs with silver sides and turn bright red while they are spawning. These salmon can be nearly three feet long and typically weigh about eight pounds and are plentiful but very difficult to catch with a rod and reel in the saltwater. This type of salmon is found throughout the Pacific Northwest, Russia, and East Asia.

Whether you’re an experienced fisherman or new to the sport, the Puget Sound has a lot to offer when it comes to salmon fishing. If you’re interested in a Pacific Northwest fishing trip or want to learn more about salmon in this area, visit our website today!